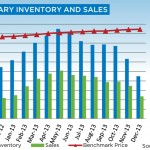 Calgary, Jan. 2, 2014 – City residential sales totaled 1,172 units in December, bringing total sold units for 2013 to 23,489. Prices for the year were up by 8.6 per cent over 2012.
“Sales growth exceeded expectations in 2013, pushing above long-term trends,” said Ann-Marie Lurie, CREB®’s chief economist. “Two consecutive years of elevated levels of net migration, combined with an improving job outlook and confidence surrounding long-term economic prospects, supported the demand growth.”
As expected, both new listings and transactions in December eased over the previous months because it is typically a slower time of the year for sales. However, sales activity for the month was in line with long-term averages, despite poor weather conditions just before the holiday season. “Typically, fewer sellers list their homes in December,” said Becky Walters, CREB® president. “There were more new listings this year than in 2012 because some sellers saw the continued price gains and decided it was the right time to list.”
Market conditions favored the seller for much of 2013, causing price gains in both the single-family and condominium sectors in the city.
The single family benchmark price was $472,200 in December, a 0.3 per cent increase over the previous month and an 8.6 per cent increase over the previous year. On an annual basis, unadjusted single family prices grew by more than seven per cent in 2013, exceeding previous highs.
“Prices have recovered in the single-family market, but sellers need to keep in mind there are differences between communities and types of homes,” said Walters. “Higher-end homes (priced above $500,000) have recorded slower price growth than those in the lower-price segment. And there are many communities where prices have not surpassed previous highs.”
There were 16,302 single-family homes sold in 2013, an 8 per cent increase over the previous year. Meanwhile, the 22,569 new listings were nearly one per cent higher than in 2012.
Condominium apartment sales totaled 4,007 units in 2013, more than 14 per cent higher than in 2012. Condominium townhouse sales totaled 3,180 units a 22 per cent increase over 2012.
“The condominium market is more affordable than single family, and that is attractive to first-time buyers who are weighing rising rental costs against ownership costs,” said Walters. “Investors are also attracted to condos, because prices have not yet fully recovered to their previous highs.”
Condominium apartment and townhouse prices totaled $278,600 and $307,100 respectively in December. On average, annual benchmark price growth in the townhouse market totaled just more than six per cent, compared to the apartment sector increase of nearly nine per cent.
“In 2014, both sales activity and prices are expected to improve, but not at the same pace recorded this year,” said Lurie “While factors influencing demand will support growth in 2014, rising listings and increased competition from the new home sector should alleviate some of the supply pressure in the market.”
Those factors, combined with potential increases in long-term lending rates, should take some of the steam off the exceptionally strong price growth recorded in 2013, said Lurie.

Tanja and Ariette are knowledgeable, persistent, and they truly fight for you. There were things they brought up that we didn’t consider, from conditions we should add to the sale, to things we should be looking for.