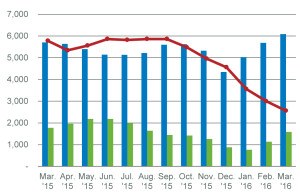 Housing prices trend down in March

“With no improvement in the labour market, it’s no surprise that we continue to face downward pressure on housing sales activity and prices,” said CREB® chief economist Ann-Marie Lurie.

“Provincial unemployment rates are at the highest level recorded since the early ‘90s,” said Lurie, adding that Calgary’s unemployment rate in February rose to 8.4 per cent, which is higher than the provincial average of 7.9 per cent.

March home sales in Calgary totaled 1,588 units, 11 per cent below the same time last year and 28 per cent lower than long-term averages for the month. Calgary also saw housing supply gains in most price ranges. Inventory levels rose by seven per cent to 6,084 units in March. Overall, months of supply has averaged five months in the first quarter of 2016.

“As we move into spring, we are starting to see more foot traffic at open houses and showings from potential buyers,” said CREB® president Cliff Stevenson. “For now, this activity hasn’t translated into improved sales in most segments of the market.”

The apartment sector has been the hardest hit by the recent downturn. After the first quarter of the year, apartment sales totaled 554 units, a 17 per cent decline over the same period last year. Apartment benchmark prices have been trending down since late 2014. In March, benchmark apartment prices totaled $281,300, seven per cent lower than levels recorded prior to the slide and 4.93 per cent lower than levels recorded last year.

“Home buyers continue to wait and see if there are going to be further declines in home prices before making an offer,” said Stevenson. “Timing the bottom of the market is proving to be quite a challenge in the housing market we are faced with now.”

It is refreshing to work with a professional who knows her stuff, works efficiently, has high ethical standards and is friendly to boot! It seems that she had thought through and planned her approach from the client’s point of view, which just made it all so much easier and less stressful than it could have been.